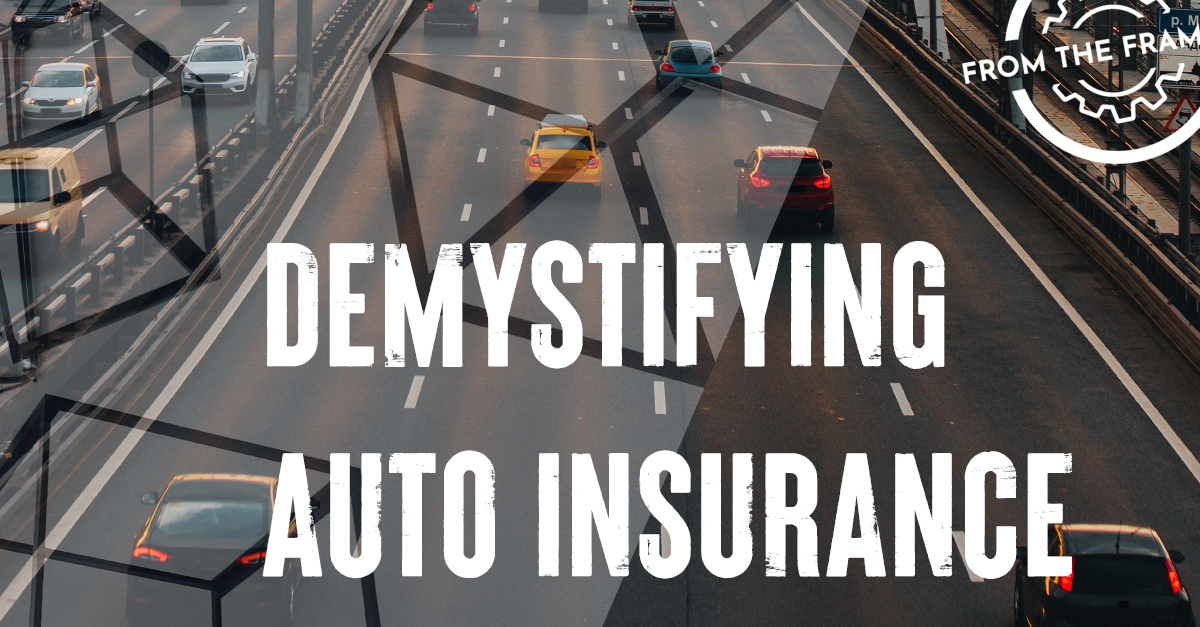 The subject of insurance can be a little touchy to bring up since if you’re talking about it, that usually means something unexpected or unwanted happened. Well, the same goes for collision repair so what better way to dust off two subjects that nobody wants to discuss than by mashing them together! That’s exactly what we did in episode 7 of From the Frame up when we met with the Head of Business Development and General Counsel at Onlia insurance, Fernand Vartanian to peel back the layers and uncover the common misconceptions associated with auto insurance.

Turn Down In Mileage

With the majority of the population significantly reducing the amount and frequency of driving there was a natural snapback effect that occurred in both the auto insurance and collision repair industries. Most people wanted to find cost savings anywhere they could and with the average household income during the pandemic dropping due to layoffs and work closures who could blame them. One of the first places people looked was at their vehicle insurance because if you aren’t driving every day or if you have two insured vehicles but only need one for the foreseeable future, it would be unnecessary to keep the same type of insurance on the vehicle long-term. The ability for a digital insurance company like Onlia to offer their insureds flexibility when it comes to their premiums is part of what makes them so appealing to a generation that identifies with companies that adapt to their changing lifestyles. Implementing value offerings that help your customers is a trademark of any good service-based business and because Onlia is a digital-only insurer, the ability to connect with their insureds and present them with solutions was and remains seamless. For bricks and mortar services like collision and auto body repair the challenge is a little tougher and the limited driving volume magnified the revenue loss. However, with CSN’s outstanding leadership and owner/operators that understand their communities, activating useful revenue sources like vehicle sanitization and free valet service helped sustain the business during early months of the pandemic. For both Onlia and CSN the staying power of these services beyond the year 2021 is obvious. If it adds value to life a consumer then it makes sense to keep the offering not as a value add but as a featured menu item.

Turn Up In Rental Allowance

An interesting trend began to happen as people decreased the amount of driving they were doing in personal vehicles. An industry desperate for air travel or travel of any kind for that matter felt a bit of a stabilization due to the public’s desire to take road trips. The rental industry was absolutely decimated by the lack of flights whether for business or pleasure. But as we discussed in the episode, there were a lot of insureds specifically from Ontario who wanted to extend their rental allowance to use a vehicle that they didn’t own to travel throughout the province. The unexpected uptick in requests for rental allowance extensions represented a boon for an industry starved for business and because of the flexibility of insurers like Onlia, consumers were able to leverage some of the value that had already paid into at a time when there wasn’t much in the way of options for recreation.

Pulling the Levers on Premiums

Understanding the insurance policy that you have and how much room you have to make adjustments to save costs is an important aspect of being insured. The way Onlia presents the options to their insureds is through transparency. There are a few ways to create cost-savings without cancelling the policy entirely (which is a topic we touched on and we’ll go into detail further down the page). Going from insuring two vehicles to one is an easy way to save on insurance premiums. Despite removing the vehicle, as an individual you remain insured which is crucial to maintaining a history of insurance on your driving record. The other way to generate savings is to increase your deductible which automatically lowers your premium. It can be useful to take the monthly saving on the payments you are making and increasing the deductible you would pay in the event of a claim and if it’s worth the risk then it can be a significant benefit to your monthly budget. Changing the type of coverage, you want is another way to decrease your monthly payments and by shifting from comprehensive, collision, or liability only coverage there is a huge amount of money to be saved especially depending on the type of vehicle you drive in conjunction with your driving history.

It took a while but we arrived at the first misconception about auto insurance and that is the flat-out removal of coverage is not going to save you money in the long run. The thought of stopping insurance payments in full will have an immediate positive effect on your budget but in the long term it hurts you. This is because the amount you pay for insurance is influenced heavily by the length of time you’ve been insured. So, if you were experiencing a fiscal squeeze over the last 12-months – like most of us who don’t carry the last name Musk or Bezos – then it would have made logical sense to look at whether or not you needed to use your vehicle every day and decide if you needed it insured at all. However, despite the natural inclination to cancel the policy in its entirety, it’s the worst decision an insured driver can make if they ever want to get auto insurance again. Taking yourself out of the game when it comes to your driving history is the fastest way to pay an inflated insurance premium when you get back in.

The concern about what companies do with customer data is high but despite the evergreen sensitivity about where the information is going the average consumer still buys into the concept of trading their information for savings. We see the messages all the time, leave your email and get % off or create a new account and get % off your first order. It’s a strategic approach the organizations take to capturing customer data in an effort to market to them directly and for the most part as consumers we don’t even flinch let alone make an objection to the concept. If you are looking to make a real impact on how much you pay for auto insurance leveraging usage-based insurance is a fast path to savings. The most common of all auto insurance misconceptions is that the data shared about the driving habits of the consumer is used against them to increase rates and make it harder to get affordable insurance. In actuality if you are a good driver the likelihood if realizing cost savings via the integration of usage-based insurance is much higher. The operative term there was ‘good driver’ so if you have bad habits, don’t obey the rules of the road, or think of Domenic Toretto as a role model then UBI probably isn’t for you.

Fernand Vartanian is the Head of Business Development and General Counsel. He received his Master of Law degree from New York University School of Law and has worked exclusively in insurtech as General Counsel for several leading insurance companies. He’s overseen and guided both private and public corporations as they navigated complex regulatory environments and jurisdictions across the globe. Fernand uses his expansive skillset to help Onlia disrupt the insurance industry and change the way insurance works for Canadians.

Onlia Holding Inc., through its wholly owned subsidiaries Onlia Agency Inc. & Onlia Services Inc., offers innovative digital insurance and mobile technology products to the Canadian market. Onlia’s mission is to create a community around making Canada a safer place, and to provide tools and motivation to facilitate safer behaviours. Launched in 2018, Onlia is a joint venture between Achmea Canada Holding Inc., a wholly owned subsidiary of Achmea B.V. the largest insurance group of the Netherlands, and Fairfax Financial Holdings Limited, a Canadian holding company which, through its subsidiaries, is engaged in property and casualty insurance and reinsurance and investment management. Using proprietary and award-winning technology, Onlia is rethinking the way Canadians approach safety and insurance. Join the community at Onlia.ca and on Facebook, Twitter, and Instagram.

Thanks for tuning in!

What’s up everybody and welcome to From the Frame up! The podcast that weaves through traffic to cover the most important topics in the automotive industry. In each episode we take an industry professional off the floor or out of the office and put them in the passenger’s seat to navigate a different subject from the automotive landscape.

Keep Up To Date

Don't Miss our posts. Subscribe to From The Frame Up.