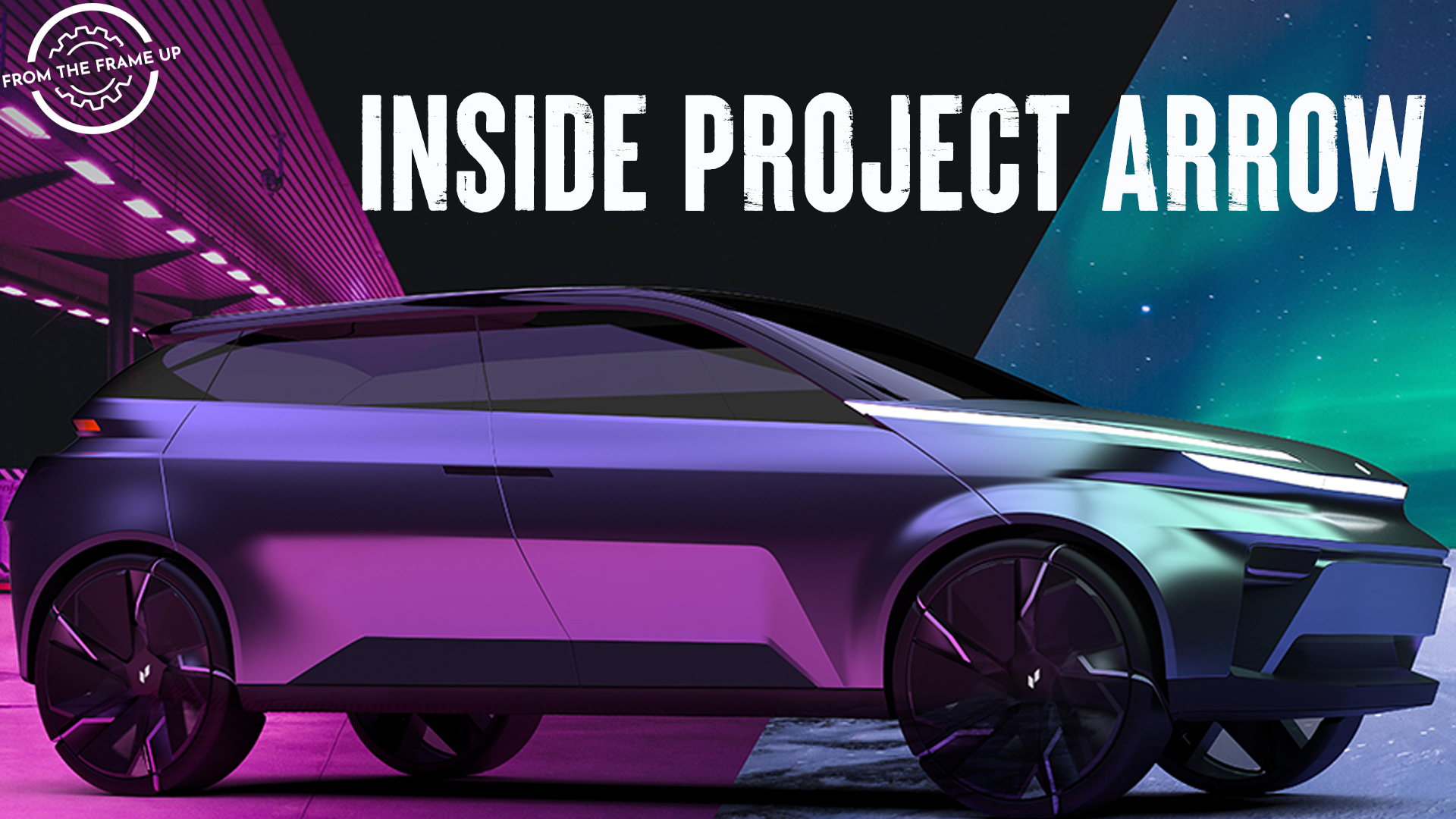 In the fourth episode of the season we spoke with a true veteran of the automotive industry, the Chief Technical Officer at the Canadian Automotive Parts Manufacturer’s Association, Colin Singh Dhillon. His expertise in the field of connected and autonomous vehicles and the technological advancements within the global landscape of the automotive industry is renowned so the conversation that followed was both informative and thought provoking.

Colin was schooled in the UK but spent much of his career working for ABC Technologies, a privately owned Canadian company that is one of the world’s leading automotive systems and components manufacturers. Using his intuition to read the tea leaves about the direction of the industry Colin pivoted from a design role to the APMA. Its his work on the APMA’s Project Arrow that got our attention. Before we got into the details of Canada’s coolest vehicle manufacturing project Colin flexed his muscle by giving us a lot to think about when it comes to vehicle technology.

It is one of the most attractive yet controversial issues within the auto industry today. The idea of a vehicle that drives itself and requires limited or no intervention from a user is terrifying to some and incredibly appealing to others. That is the pursuit of many a vehicle manufacturer and as Colin specified in our conversation, some automakers are inching closer to full autonomy. It is important to clarify that there are multiple levels when it comes to autonomous drive. Coming as a surprise to most consumers though, even ones informed on all the cool new tech of today’s modern vehicle, is we are a long way from a full level 5 autonomous vehicle. We currently sit comfortably in the level 2 range where some modern vehicles have advanced driving assistance systems (ADAS) that allows braking, steering, and acceleration to be controlled by technology in certain scenarios but still requires a living, breathing and most importantly, thinking human being to attend the wheel to operate. Of course therein lies the issue and where many experts are split on the potential benefits of autonomous technology as we chase after that coveted level 5 achievement. It seems we can’t go a single week without hearing about a Tesla driver who decided to leave the vehicle on autopilot while they knit a sweater in the backseat. So as new tech begins to roll out to more consumers via the mass market manufacturers the issue becomes how do these vehicles that are meant to talk to one another, interact with the vast majority of vehicles that don’t have the capability to maneuver through traffic without human involvement?

The answer is complex, but Colin gave us some excellent insight into what it might take to move from where we stand today across the wide gap that exists between level 2 and ADAS to level 3 and awesome driving features like the Mercedes-Benz drive pilot. “We need a smart car and dumb infrastructure” Colin told us. Meaning that for true level 3 and shortly thereafter level 4, to actually happen, the technology in the vehicle is dependent on the technology of the surrounding infrastructure such as cell towers supporting 5G, traffic lights, wearable tech from pedestrians and so on. The ecosystem surrounding the car has to be able to provide the car with valuable data for the artificial intelligence within it to function and safely transport the occupants. Colin believes this will likely happen in the next 3-4 years, but its use will be restricted to geographic areas that can support it such as test beds cordoned off from the rest of the driving public so that the environment can be safely monitored.

Cities across the globe will now face a monumental challenge to keep up with the pace of the multi-billion dollar privately owned tech companies and automotive manufacturers leading the charge towards an autonomous automotive future. This part of the conversation with Colin was so fascinating because he touches on things that make total sense but are so often overlooked. The rapid advance of driving tech is supported by mobility services. For all the features that allow a person to remain truly hands-off to work, the vehicle must maintain connectivity to the network. That network needs to be able to support hundreds if not thousands of other vehicles all communicating with one another in real-time. The phones or whatever other wearable technology we have as pedestrians also must connect to that network so that the data shared with all vehicles keeps every human in the surrounding area free of danger. That is an astounding amount of information that needs to be processed in microseconds. Converting standard cell towers to 5G is no easy task and doesn’t come cheap. Additionally, as Colin aptly pointed out, there are regions where many drivers travel that simply don’t have adequate network coverage to facilitate level 4 functions. What is most likely to happen is the emergence of a concept called the Islands of Autonomy: a theory first detailed by KPMG wherein the existence of a level 4 vehicle is limited to major metro markets with the demographic criteria to support their high technological demand. Mobility providers focus on these densely populated urban centres as areas that need the best network connectivity for its user’s satisfaction but most cities across the globe will be left out for the foreseeable future.

In December of 2019, the APMA committed to developing Canada’s first zero emission concept vehicle. Project Arrow was officially launched at CES in January of 2020 with the objective of showcasing all of Canada’s talent from vehicle design to engineering. The project quickly received support from the big 3 automakers (Ford, GM and Fiat Chrysler) and in conjunction with assistance from Canada’s universities in the form of a 20-submission design competition – the eventual winner coming from Carleton University – the project began to take flight. Project Arrow is a redemption story. It is named after the failed development of the Avro Arrow supersonic jet which was cancelled in 1959 resulting in the loss of more than 25,000 jobs and deemed by many a betrayal to the Canadian aerospace industry. The attempt to build the Avro Arrow brought together some of the brightest minds in Canada at the time and was incredibly influential on a global scale as it helped to establish Canada’s prowess in scientific research and development. Dozens of engineers and technicians from the Avro project went to the US to become part of the mission to put a man on the moon with others crossing the Atlantic to help build Concore for the British. Now some 60 years later, Project Arrow aims to succeed where the Avro failed and this time around, it will have the full support of the provincial and federal government from runway to takeoff.

Colin Singh Dhillon is the Chief Technical Officer at Canada’s Automotive Parts Manufacturers’ Association, and a globally recognized Thought Leader. He is leading connected and autonomous vehicle technology projects and providing support to both the Canadian automotive industry and multiple levels of Government on matters of Cybersecurity, Mobility, SMART Infrastructure, and Industry 4.0/IoT initiatives. With over nineteen years of experience in the automotive sector, Colin has been a visionary in establishing and implementing new ideas to support innovative design. His prior responsibilities for this global Tier 1 parts supplier have included being the lead in Advanced Manufacturing, Marketing & Communication, Design, Corporate Social Responsibility, and leading the global Advanced Product Development team.

His diverse background provides valuable insights when challenged with solving new problems. In addition to his position as CTO, he also continues to spread his passion for innovation and design-thinking through speaking engagements and lectures at academic institutions and global conferences. Colin is also a member of EyesOn Design judging panel at the annual North American International Auto Show (NAIAS).

The Automotive Parts Manufacturer’s Association PMA is Canada’s national association representing OEM producers of parts, equipment, tools, supplies, advanced technology, and services for the worldwide automotive industry. The Association was founded in 1952 and its members account for 90% of independent parts production in Canada. In 2018, automotive parts shipments were over $35 Billion, and the industry employment level was over 100,000 people. https://www.apma.ca

Project Arrow is the APMA’s 3rd generation of innovative industry collaboration projects since 2014, when it launched the Connected Lexus Technology Demonstration Program together with 14 independent Canadian firms. In 2017, the APMA launched a fleet of demonstration vehicles in Stratford, Ontario as part of Ontario’s Autonomous Vehicle Innovation Network and is currently working with more than 90 auto tech start-ups. Two of those vehicles drove more than 3,600 kilometres from Toronto to Las Vegas, Nevada in 2020 to launch Project Arrow at CES2020.

Thanks for tuning in!

What’s up everybody and welcome to From the Frame up! The podcast that weaves through traffic to cover the most important topics in the automotive industry. In each episode we take an industry professional off the floor or out of the office and put them in the passenger’s seat to navigate a different subject from the automotive landscape.

Keep Up To Date

Don't Miss our posts. Subscribe to From The Frame Up.